A certain amount of boiling is needed in order to successfully transfer heat from a hot metal surface to the liquid coolant.  It is important to understand the four distinct phase changes that an engine coolant will experience.

At higher engine loads and speeds the rate of heat flow through the cylinder head is increased until steam bubbles are formed in certain regions on the surface of the water jacket. These areas are the metal bridge between the exhaust valve seats, spark plug boss, etc. Nucleate boiling involves the nucleation and growth of vapor bubbles that originate at sites of high temperature. In this phase large numbers of bubbles form on the hot surfaces and travel through the bulk of the coolant later re-condensing as they move to a lower temperature region.

Under severe engine load and speed the vapor bubbles become so large and numerous that the liquid has difficulty flowing back to the hot metal surface of the cylinder head. When this critical heat flux is reached the hot surface of the water jacket suddenly becomes insulated by individual steam bubbles that join together to form a film. Under these conditions the film insulates the water jacket from the coolant and metal surface temperature of the cylinder head elevates dramatically and can cause the engine to ping even though the temperature gauge shows no sign of this condition. This phase is often called crisis boiling.

If the metal surfaces subjected to unstable film boiling can withstand even higher heat levels without melting, then the temperature is raised further by increasing the difference between the metal surface and the liquid boiling temperature until a stable film is formed. With stable film boiling heat transfer is now mainly by conduction and radiation across the vapor film. At this time engine failure is very possible.

In a typical engine the first two phases of coolant boiling occurs (in the cylinder head) while the last two will be experienced when either the horsepower level is too high for the coolant or the system is not designed properly.

Evans Waterless Engine Coolant has a boiling point of 190 degrees C and remains in a phase of nucleate boiling for much longer than conventional engine coolants.  This allows the metal surface to reject heat to the coolant efficiently without progressing to the ‘unstable film boiling’ phase.  The absence of steam/ water vapour ensures that the metal surfaces never become insulated and liquid-to-metal contact is evenly maintained throughout the cooling system. 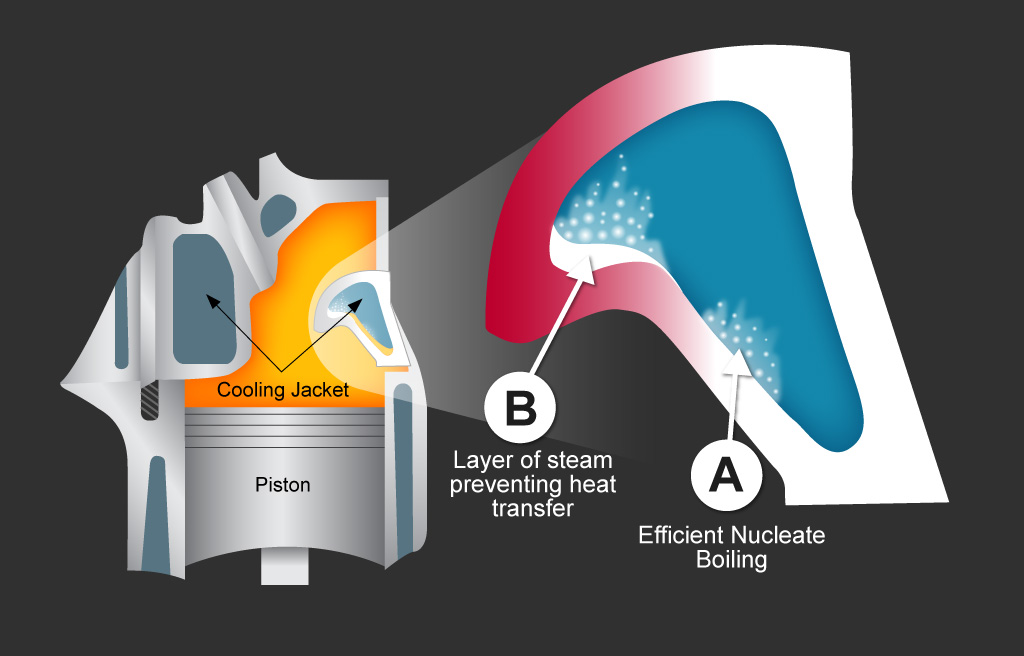